A through D
E through K
L through Z

The following charts represent “causal path analysis,” showing the relative importance of various paths between key variables.  The entries are betas.  The causal impact of any multistep path is calculated by the cross-product of the betas along that path.  The sum of the various paths between any two variables can be simply added up and (if the model is correct) that sum should equal the bivariate beta between those two variables.  In this case the numbers add up as predicted, which means the model is probably correct (with no relevant omitted variables).

The impact of parental education (in this case simply the sum of mom’s education and dad’s education) on college-going immediately after PCHS is almost entirely driven by parental encouragement or academic tracking (here combined into a single variable, because those two variables turn out to be virtually identical), though there is a minor (statistically significant) path via class rank. 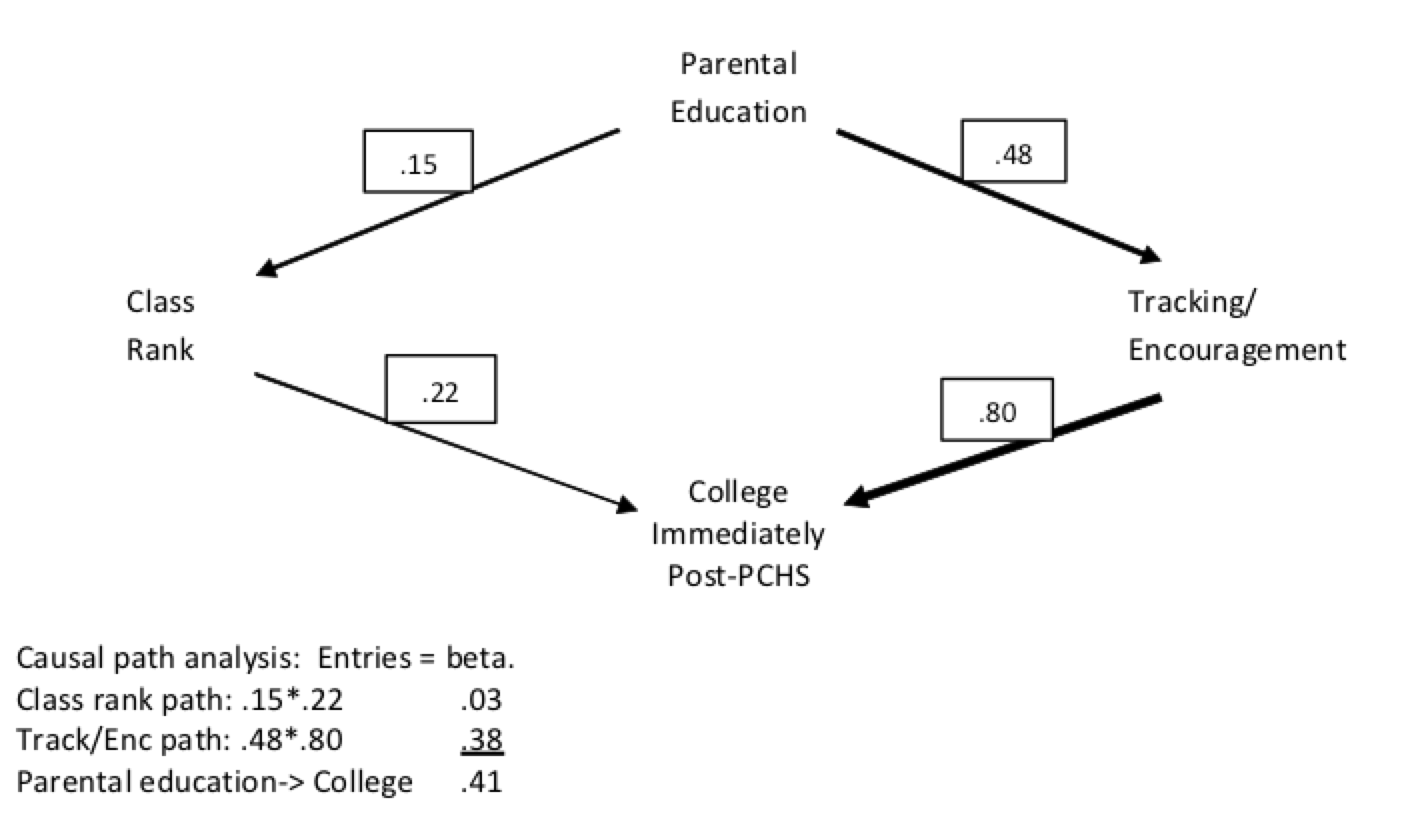 This model implies that roughly 16 percent of the total variance in immediate college entry was predicted by parental education, mostly because children from better educated homes got more encouragement to attend college.  Whatever the causal story, that modest correlation between parental education (on the one hand) and parental encouragement/school tracking (on the other hand) got embedded at an early stage, and nothing else that happened afterwards either strengthened or weakened the link between parents’ educational level and immediate post-PCHS college-going.

No measure of parental resources adds any predictive power whatsoever—not parental occupational status, not parental unemployment, not family economic insecurity during high school, not homeownership, not neighborhood characteristics, and not family structure.  (We did not attempt to gather data on family income, because children’s estimates of parental income are known to be highly unreliable, especially at a distance of more than 50 years.)  Parental education, parental encouragement, and class rank were all modestly predictive of extracurricular participation, but holding constant those variables, extracurricular participation itself was unrelated to college-going. 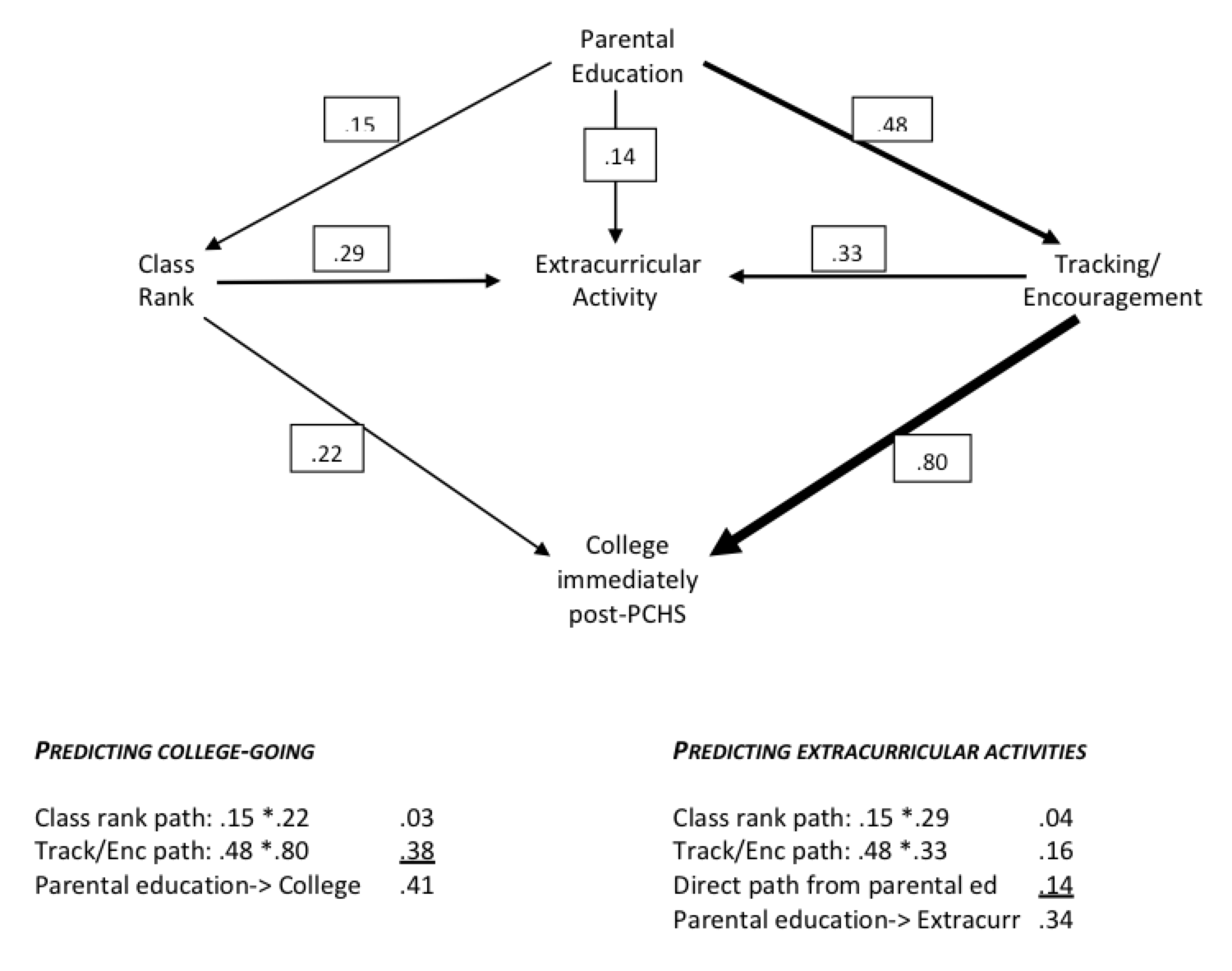 Because post-secondary education later in life (e.g., community college) was much less closely correlated with parental encouragement or high school tracking than was immediate college-going, a comparable path diagram predicting ultimate educational attainment shows even less impact of family background.  This model implies that less than 7 percent of total variance in final educational attainment in the Port Clinton class of 1959 was predicted by parental education.  In fact, high school class rank predicted final educational attainment somewhat better than it predicted college entry immediately after high school.  Assuming that class rank was a rough proxy for academic merit, this pattern suggests that post-secondary education later in life tended to be more meritocratic than college entry immediately after high school.  In other words, high-achieving students who had not been encouraged to enter college by their parents or the high school tended to make up for that later by going back to school to get additional education. 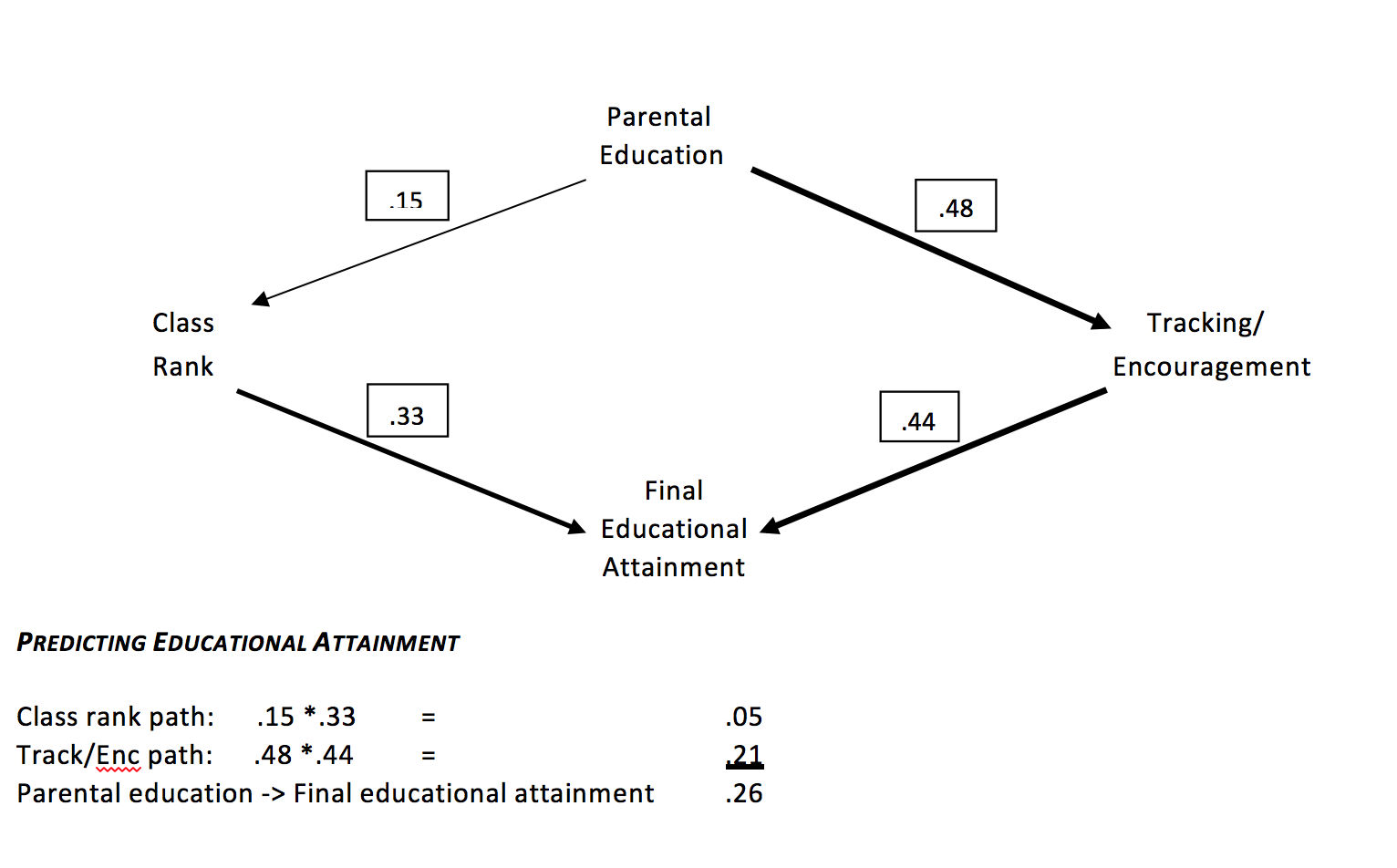 Daron Acemoglu and David Autor, “What Does Human Capital Do? A Review of Goldin and Katz’s The Race between Education and Technology,” Journal of Economic Literature 50 (June 2012): 426–463.

Paul R. Amato, “The Impact of Family Formation Change on the Cognitive, Social, and Emotional Well-Being of the Next Generation,” The Future of Children 15 (Fall 2005): 75-96.

David Autor, The Polarization of Job Opportunities in the U.S. Labor Market: Implications for Employment and Earnings, The Center for American Progress and The Hamilton Project, accessed May 13, 2014, http://economics.mit.edu/files/5554.

Suzanne M. Bianchi and John Robinson, “What Did You Do Today? Children’s Use of Time, Family Composition, and the Acquisition of Social Capital,” Journal of Marriage and Family 59 (May 1997): 332-344.

Beckett A. Broh, “Linking Extracurricular Programming to Academic Achievement: Who Benefits and Why?” Sociology of Education 75 (January 2002): 69-95.

Linda M. Burton, “Seeking Romance in the Crosshairs of Multiple-Partner Fertility: Ethnographic Insights on Low-Income Urban and Rural Mothers,” ANNALS of the American Academy of Political and Social Science 654 (July 2014): 185-212.

Adam Carasso and C. Eugene Steuerle, “The Hefty Penalty on Marriage Facing Many Households with Children,” The Future of Children 15 (Fall 2005): 161.

Andrew J. Cherlin, The Marriage-Go-Round: The State of Marriage and the Family in America Today (New York: Vintage Books, 2009).

Raj Chetty, Nathaniel Hendren, Patrick Kline and Emmanuel Saez, “Where is the Land of Opportunity?  The Geography of Intergenerational Mobility in the United States,” NBER Working Paper No. 19843 (Cambridge, MA: National Bureau of Economic Research, January 2014).

Raj Chetty, Nathaniel Hendren, Patrick Kline, and Emmanuel Saez “Where is the Land of Opportunity? The Geography of Intergenerational Mobility in the United States,” forthcoming Quarterly Journal of Economics (November 2014).

Robert Crosnoe, Fitting In, Standing Out: Navigating the Social Challenges of High School to Get an Education (New York: Cambridge University Press, 2011).

Douglas B. Downey, Paul T. von Hippel and Beckett A. Broh, “Are Schools the Great Equalizer? Cognitive Inequality during the Summer Months and the School Year,” American Sociological Review 69 (October 2004): 613–635.

David L. DuBois et al., “How Effective Are Mentoring Programs for Youth? A Systematic Assessment of the Evidence,” Psychological Science in the Public Interest 12 (August 2011): 57-91.

Mikaela J. Dufur, Toby L. Parcel and Benjamin A. McKune, “Does Capital at Home Matter More Than Capital at School? The Case of Adolescent Alcohol and Marijuana Use,” Journal of Drug Issues 43 (January 2013): 85-102.

Kathryn Edin and Timothy Nelson, Doing the Best I Can: Fathering in the Inner City (Berkeley, CA: University of California Press, 2013).

Vincent J. Felitti et al., “Relationship of Childhood Abuse and Household Dysfunction to Many of the Leading Causes of Death in Adults: The Adverse Childhood Experiences (ACE) Study” American Journal of Preventive Medicine 14 (May 1998): 245–258.

Pope Francis, in “Apolstolic Exhortation Evangelii Gaudium [The Joy of the Gospel], to the Bishops, Clergy, Consecrated Persons and the Lay Faithful on the Proclamation of the Gospel in Today’s World,” Vatican Press,2013, accessed October 6, 2014, http://w2.vatican.va/content/dam/francesco/pdf/apost_exhortations/documents/papa-francesco_esortazione-ap_20131124_evangelii-gaudium_en.pdf.

Frank F. Furstenberg Jr., “Transitions to Adulthood: What We Can Learn from the West,” The ANNALS of the American Academy of Political and Social Science 646 (2013): 28-41.

Frank F. Furstenberg, “Fifty Years of Family Change: From Consensus to Complexity,” ANNALS of the American Academy of Political and Social Science 654 (July 2014): 12-30.

John R. Gillis, A World of Their Own Making: Myth, Ritual, and the Quest for Family Values (Cambridge, MA: Harvard University Press, 1996).

Claudia Goldin and Lawrence F. Katz, “Decreasing (and then Increasing) Inequality in America: A Tale of Two Half-Centuries,” in The Causes and Consequences of Increasing Income Inequality, ed. Finis Welch (Chicago: University of Chicago Press, 2001), 37-82.

Claudia Goldin and Lawrence F. Katz, “The Future of Inequality: The Other Reason Education Matters So Much,” Milken Institute Review (July 2009), 28.

Claudia Goldin, “America’s Graduation from High School: The Evolution and Spread of Secondary Schooling in the Twentieth Century,” Journal of Economic History 58 (June 1998): 345-374.

Claudia Goldin and Lawrence F. Katz, “The Legacy of U.S. Educational Leadership: Notes on Distribution and Economic Growth in the 20th Century,” American Economic Review 91 (May 2001): 18-23.

Mark Granovetter, Getting a Job: A Study of Contacts and Careers (Cambridge, MA: Harvard University Press, 1974).

Eric A. Hanushek and Ludger Woessmann, “The Role of Cognitive Skills in Economic Development,” Journal of Economic Literature 46 (September 2008): 607-668.

Juho Härkönen and Jaap Dronkers, “Stability and Change in the Educational Gradient of Divorce: A Comparison of Seventeen Countries,” European Sociological Review 22 (December 2006): 501-517.

Anne T. Henderson and Nancy Berla, A New Generation of Evidence: The Family is Critical to Student Achievement (Washington, DC: National Committee for Citizens in Education, 1994).

Matthew Hill, “Love in the Time of Depression: The Effect of Economic Downturns on the Probability of Marriage,” (paper presented at UCLA, All-UC/Caltech Economic History Conference, April 22, 2011, http://www.ejs.ucdavis.edu/Research/All-UC/conferences/2011-spring/Hill_LoveDepression042011.pdf).

Harry J. Holzer, “Workforce Development as an Antipoverty Strategy: What Do We Know? What Should We Do?” Focus 26 (Fall 2009), accessed October 11, 2014, http://www.irp.wisc.edu/publications/focus/pdfs/foc262k.pdf.

Feng Hou and John Myles, “The Changing Role of Education in the Marriage Market: Assortative Marriage in Canada and the United States since the 1970s,” Canadian Journal of Sociology 33 (2008): 337-366.

Paul A. Jargowsky, “Concentration of Poverty in the New Millennium: Changes in Prevalence, Composition, and Location of High Poverty Neighborhoods,”  (Century Foundation and Rutgers Center for Urban Research and Education, 2013), accessed August 31, 2014, http://tcf.org/assets/downloads/Concentration_of_Poverty_in_the_New_Millennium.pdf.

William Jeynes, “A Meta-Analysis of the Efficacy of Different Types of Parental Involvement Programs for Urban Students,” Urban Education 47 (July 2004): 706-742.

Anthony King, “Ideas, Institutions and the Policies of Governments: A Comparative Analysis: Parts I and II,” British Journal of Political Science 3 (July 1973): 291-313.

Victor Lavy, Olmo Silma, and Felix Weinhardt, “The Good, the Bad, and the Average: Evidence on the Scale and Nature of Ability Peer Effects in Schools,” NBER Working Paper No. 15600 (Cambridge, MA: National Bureau of Economic Research, 2009).

Steven P. Martin, “Growing Evidence for a “Divorce Divide”?: Education and Marital Dissolution Rates in the U.S. since the 1970s,” unpublished paper, (University of Maryland-College Park, 2005), accessed May 12, 2014, https://www.russellsage.org/sites/all/files/u4/Martin_Growing%20Evidence%20for%20a%20Divorce%20Divide.pdf.

Rebecca A. Maynard and Richard J. Murnane, “The Effects of a Negative Income Tax on School Performance: Results of an Experiment,” Journal of Human Resources 14 (Autumn 1979): 463-476.

Sara McLanahan and Christine Percheski, “Family Structure and the Reproduction of Inequalities,” Annual Review of Sociology 34 (2008): 258-59.

Sara McLanahan, “Fragile Families and the Reproduction of Poverty,” Annals of the American Academy of Political Science 621 (January 2009): 111-131.

Sara McLanahan and Gary Sandefur, Growing Up with a Single Parent: What Hurts, What Helps (Cambridge, MA: Harvard University Press, 1994).

Sarah McLanahan and Christine Percheski, “Family Structure and the Reproduction of Inequalities,” Annual Review of Sociology 34 (2008): 268.

Suzanne Mettler, Soldiers to Citizens: The G.I. Bill and the Making of the Greatest Generation (Oxford, UK: Oxford University Press, 2005).

Sendhil Mullainathan and Eldar Shafir, Scarcity: Why Having Too Little Means So Much (New York: Times Books, 2013).

Kelly Musick and Ann Meier, “Assessing Causality and Persistence in Associations Between Family Dinners and Adolescent Well-Being,” Journal of Marriage and Family 74 (June 2012): 476-493.

Sean F. Reardon and Kendra Bischoff, “Growth in the Residential Segregation of Families by Income, 1970-2009,” Technical report for US2010 Project (Russell Sage Foundation and American Communities Project of Brown University, 2011).

Jacob A. Riis, How the Other Half Lives: Studies Among the Tenements of New York (New York: Charles Scribner’s Sons, 1890).

Tracey Ross and Erik Stedman, “A Renewed Promise: How Promise Zones can help Reshape the Federal Place-Based Agenda,” report of the Center for American Progress, May 2014, accessed October 12, 2014, http://www.americanprogress.org/issues/poverty/report/2014/05/20/90026/a-renewed-promise/.

Maryellen Schaub, “Parenting for Cognitive Development from 1950 to 2000: The Institutionalization of Mass Education and the Social Construction of Parenting in the United States,” Sociology of Education 83 (January 2010): 46-66.

Patrick Sharkey and Felix Elwert, “The Legacy of Disadvantage: Multigenerational Neighborhood Effects on Cognitive Ability,” American Journal of Sociology 116 (May 2011): 1934–81.

Betsey Stevenson, “Beyond the Classroom: Using Title IX to Measure the Return to High School Sports,” Review of Economics and Statistics 92 (May 2010): 284-301.

U.S. Department of Education, “For Each and Every Child—A Strategy for Education Equity and Excellence,” a report to the Secretary (Washington, D.C.: The Equity and Excellence Commission, 2013), accessed October 11, 2014, http://www2.ed.gov/about/bdscomm/list/eec/equity-excellence-commission-report.pdf.

Edward N. Wolff, Top Heavy: A History of Increasing Inequality of Wealth in America and What Can Be Done About It (New York: The New Press, 2002).

The Carsey School of Public Policy at the University of New Hampshire examines opportunity gap data at the state level, including measures like income inequality and poverty, family structure, educational access and achievement to help identify the trends in the changing landscape of social mobility. To learn more, visit https://carsey.unh.edu/policy/gaps-in-youth-opportunity-by-state/about